What is China’s CCC SDoC

What is China’s CCC SDoC?

On June 16th, 2018 the Certification & Accreditation Administration of the People’s Republic of China (CNCA) announced that a supplier’s declaration (or self-declaration) CCC scheme would be available as an option to the traditional CCC scheme for a select number of products.  Up until then CCC certification in China was exclusively granted by state-owned certification bodies.  As part of the SDoC scheme their involvement is no longer required.

On October 17th, 2019 CNCA released another announcement (No. 44) indicating that some of the original product categories eligible for SDOC had been removed, but many more were added.  Another key point in this new announcement is that SDoC will no longer be an optional route.  As of January 1st, 2020, all new submissions of applicable products will be required to use the SDoC process.  Additionally, as of Nov. 1st, 2020, all existing CCC certifications will be canceled.

China’s CCC SDoC is similar to the European CE mark, in that is it somewhat self-governing.  The CCC version however does not allow quite the autonomy of CE.  The CCC SDoC program is controlled by CNCA, and all SDoC certification documentation must be upload to their on-line portal in order to be valid.  The following process is required for SDoC:

The SDoC scheme has two variations, Method A and Method B.  Each method or procedure depends on the product category as defined in the list below.  The following list also identifies product categories that have been added to SDoC in announcement No.44 as NEW: 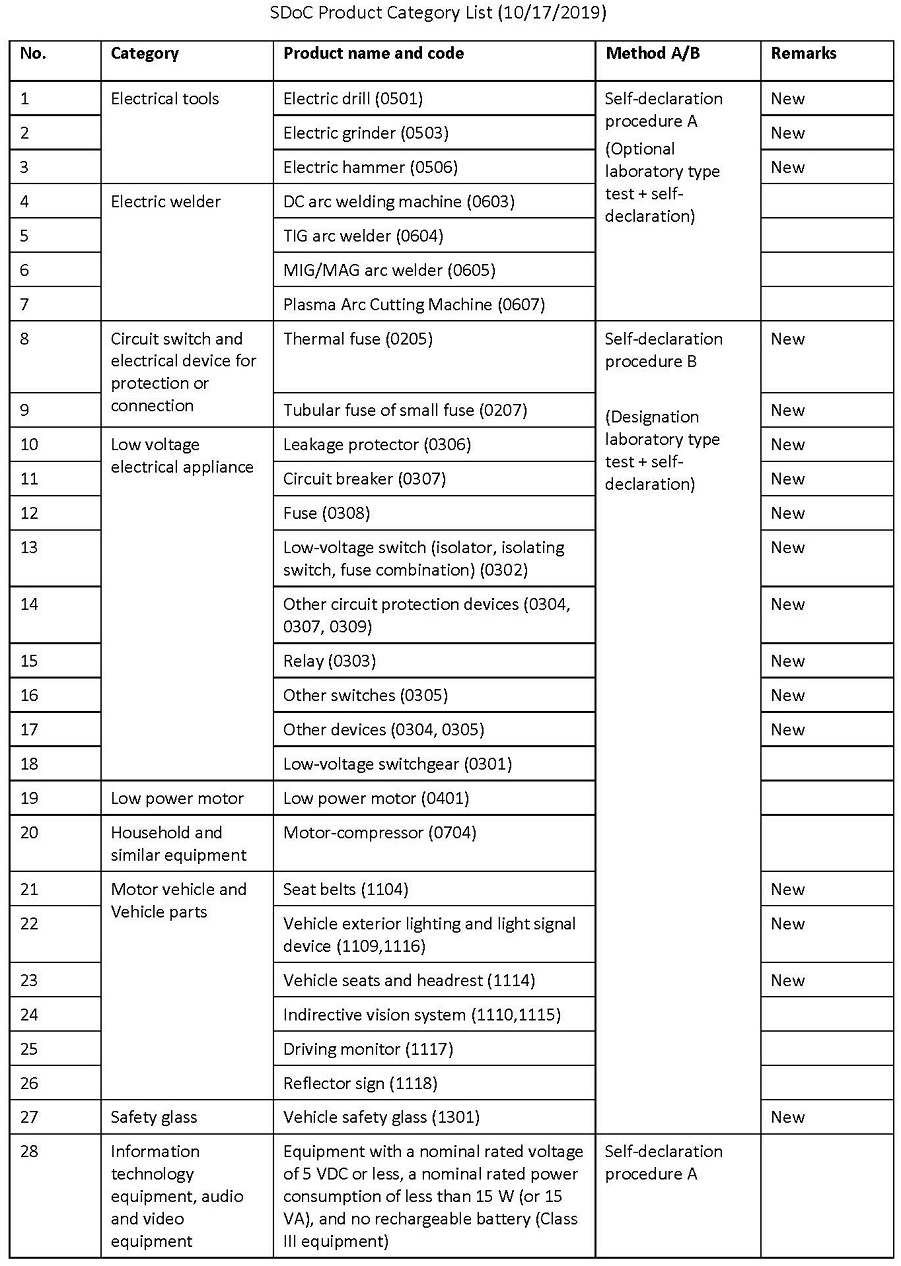 The type A procedure mentioned in the list above is the least stringent and allows testing to be conducted in-house by the manufacturer, or by any ISO 17025 accredited 3rd party laboratory.  The caveat is that for the time being, Type A product test reports can only be uploaded to the CNCA portal by in-country test labs.

The Type B procedure requires testing to be done in China, in a CCC accredited laboratory.  This laboratory must upload test reports directly to the CNCA portal.  Existing CCC products transitioning to SDoC may require re-testing depending on the age of existing test reports.  NOTE: There is no set ruling at this time regarding age of existing reports.  Currently this must be negotiated with the test lab on a case-by-case basis.  For this reason, it may be wise to transition to SDoC sooner than later in order to maximize use of existing reports, and thereby minimize re-testing.

Once all proper documentation has been uploaded to the CNCA system, the system will automatically generate a Declaration of Compliance (DoC) with a CCC certificate number and a QR code for tracking.  See illustration below of sample DoC:

Comparison of SDoC vs. Traditional CCC:

The new SDoC structure in many ways helps the manufacturer by reducing costs and lead times associated with CCC certification.  The caveat however is with the certification body essentially removed from the process, the responsibility of producing compliant products lies directly on the manufacturer.  Any non-conformances found during market surveillance will now be attributed directly to the manufacturer.  It behooves companies using the SDoC method, therefore, to ensure that they are dotting all Is and crossing all Ts.

The main differences between Traditional CCC and CCC SDoC scheme include:

The CCC mark will continue to be applied to products under the SDoC as they still fall within CCC guidelines.  The mark should be applied by the manufacturer without change for products transitioning over.  For new marks, care should be taken that the size and application method comply with CCC mark requirements.

G&M has worked with early adopters of SDoC before it became mandatory.  We are familiar with SDoC process as well as the CNCA online portal (which is currently in Chinese only), and can provide in-country representative services.  Most importantly, we have successfully obtained a number of DoCs for our current customers.  For more information about how G&M can assist with SDoC certification please feel free to give us a call at the number below, or request more info on our Contact Us Page.